Back to Reviews & Testimonials

The Tuff-Guard Hose is Lightweight and Doesn’t Kink

One of my most dreaded tasks is when clients have a hose that hasn’t been rolled up properly, so it’s bent and folded and won’t go back into place. Being the responsible horticultural professional I am, if I touch something, I have to leave it perfect. However, rolling up a heavy, kinked hose is a recipe for profuse “dammits”.

And a kinked hose happens to the best of us! I have invested in Gilmour Flexogen hoses for years, thinking them the best anti-kink hose, and they are pretty good if you roll them up religiously after every use. But over the years I’ve forgotten once or twice, and I now have a persistent kink which vexes me every time I water. Ugh!

So when Tuff-Guard offered to send me one of their kink-free hoses, I was so on it. Their website shows photos of these hoses all tortured into knots yet still unkinked. When I got it I saw why -this thing is downright bouncy! It’s got a springy feel to it and an outer spiraled wrap which keeps it from forming a “memory”.

Of course, I took the “no-kink” claim as a challenge and immediately took it upon myself to try to mess my new hose up. I stood on it, jumped on it, tied it into knots, and tried every way I could think of to kink it, to no avail. When they say it is kink-free, they mean it.

But the other thing I love about this hose is how lightweight it is! You don’t realize how heavy a hose is until you’re trying to carry a big coil of it to the far end of the garden, or you’re pulling on it to wrap it up again. But this one is easily the lightest hose I have ever felt by a large margin. I bent down to pick it up the proper way so that I wouldn’t hurt my back, and immediately felt silly as it weighed nothing. Yet the materials seem so well-engineered that I have faith it’s going to last. It’s made in the USA, after all.

Of course if you buy the Tuff-Guard hose, you may wish to invest in a hose reel. It’s so delightfully springy and lightweight that it zooms into a hose reel with little effort, and I put mine into a hose pot in about five seconds – it just wanted to cooperate with me. But the springy nature of it means that it sits much tidier in some kind of hose holder than on its own. 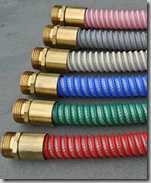 Oh, and if you want to keep up with Tuff-Guard, they’re on Twitter and Facebook, and they have a blog as well!